A massive low pressure system in the Northern Pacific is sending more Big Waves towards Maui. The surf is already starting to rise up the island chain, but it won’t start to come up in Maui until sometime tonight. The National Weather Service has issued a high surf warning for North Shores. That means wave heights in excess of 20-25 feet measured on the face. It is likely that the waves will be smaller on Maui and Oahu than on Kauai . The western angle of the swell is such that Kauai will likely block some of the swell energy from hitting Maui. That being said, this is supposed to be a longer lasting episode with wave heights lingering at Warning levels through Tuesday. Maui will see its biggest waves on Monday and Tuesday as the storm system generating the waves drifts to the North and East. The storm’s track should alleviate some, but not all of the swell shadowing for the North Shore of Maui. In terms of rideable surf on Maui, there is potential for this swell to bring surf to the Kihei and Wailea areas due to its western direction. Glenn James predicts good sized surf for the Kihei side of the island. A similar storm system a few weeks back brought waves to the Kihei area, but well under the 15 foot waves that were initially predicted. The North Shore areas may be big enough to close out most of the more popular spots. Outer reefs will be rideable for the tow crews and the kona/variable winds will be favorable. The systme will likely generate “small” surf at Peahi or Jaws. Wave faces could vary between 15 -20 feet + on Sunday with potential for bigger sets on Monday. I am sure Maui’s tow surfing community will be keeping their eyes on these spots.

Here are a couple of Jaws Pictures for those who are not on island to see the giant surf first hand: 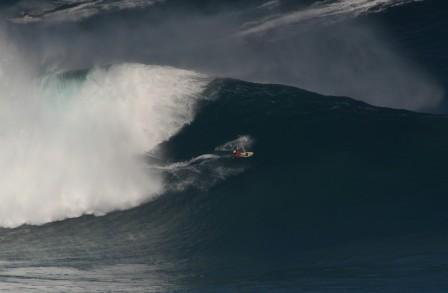 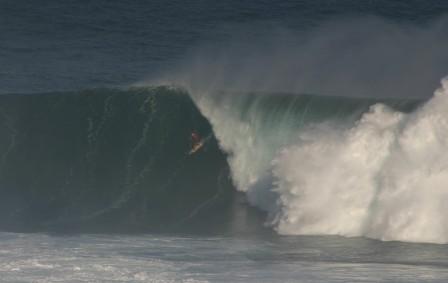