I am an admitted weather geek. Being a weather geek, I have been keeping my eyes on the weather reports from the mainland. Ice storms, record cold, and heavy snow have all been in the weather headlines. Heck, even New Orleans had snow last week. This weekend, Hawaii had its own winter storm. Granted our winter storms are a little different than typical mainland winter weather events. During the winter, we get low pressure systems that come down from the North Pacific that draw heavy tropical moisture up from the south. The result can be heavy rainfall. Oahu and Kauai bore the brunt of the winter storm this weekend with heavy rain that caused significant flooding. Maui received a nice soaking rain that helped replenish water supply without inflicting any significant damage. 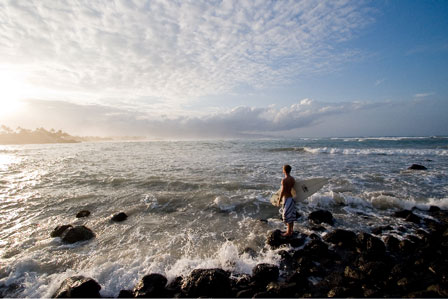 Unstable weather has been predicted throughout the next week, but so far so good for Maui. A lack of wind made things a little stickier than usual today and allowed afternoon clouds to build over the mountains. Most of the beaches were graced with sunshine and a light sea breeze. All things considered, there isn’t much to complain about the weather on Maui. We are rooting for continued good weather as we have family coming in this week to help celebrate the holiday.