Santa brought big waves to the Hawaiian Islands on Christmas day. Billy’s brother in law Paul, Billy, and I were able to sneak out between opening presents and Christmas dinner for some spectating along the cliffs above Jaws. We arrived right as the wind was starting to come up and a number of tow surfing teams were headed home. We were a little disappointed in our timing at first, but before too long a good sized crew of wind surfers arrived. The winds made for interesting conditions. They were strong enough to blow a lot of the spray off the tops of the waves. This created an almost hallucinogenic effect with rainbow colored mist cloaking the lineup. On the other hand, the winds were light enough that it made for challenging conditions for the windsurfers. The winds left some of the windsurfers short on speed when trying to catch the bigger waves. Here are a few photos that Billy and Paul took.

There was a lone tow team out surfing when we arrived. They had to have been psyched to have the lineup to themselves. 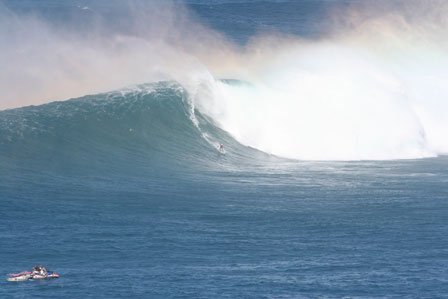 The waves were medium sized by Jaws standards, but by no means small. 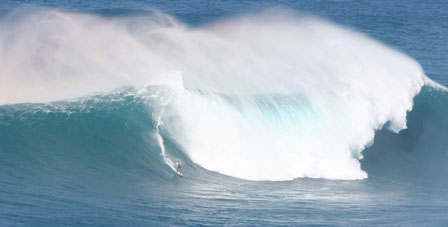 The surfers and windsurfers were partially obscured by the spray and mist coming off the first waves of a set.

This looks like Pro Windsurfer Jason Polakow going off the lip. 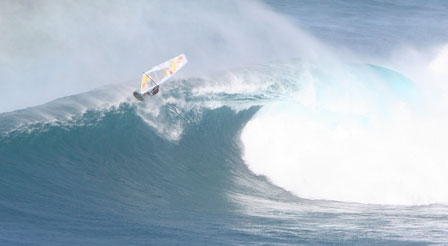 We saw this a few times on the bigger sets. The windsurfers did not have enough speed to catch the bigger waves. 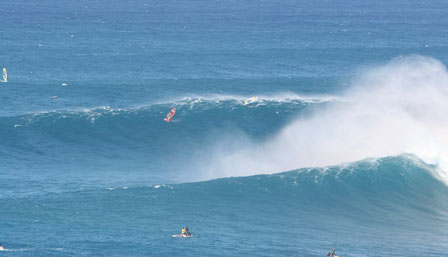 It sounds as if the conditions got a little better and bigger after we left for Christmas Dinner. It has been a good season thus far for Jaws with four pretty good sized days. This is fairly typical of an El Nino winter where we tend to get more big waves than other years. There is still a lot of winter surf ahead. If we get any more good photos, we will be sure to post them on The Maui Real Estate Blog.