It is hard to believe yet another month has whizzed by in 2011. That means it’s time again for our Unofficial Maui Real Estate Statistics. July was another solid month of real estate activity on the island. In the paragraphs below, I have information on sales volume, median prices, bank owned and short sale activity as well as a few thoughts on what the numbers mean for buyers and sellers. This is a sneak preview of the Maui statistics before the Realtors Association of Maui releases their own numbers in the next week. 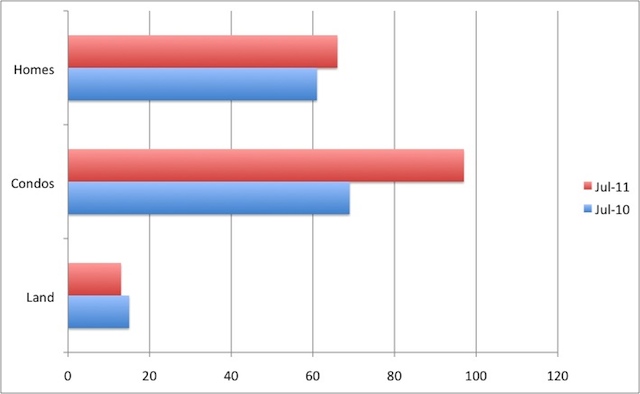 Thus far, Maui Real Estate agents have reported 66 homes sold at a median price of $404,500 for the month of July. By comparison, there were 61 homes sold in Maui last July at a median of $500,000. That is approximately an 8 % increase in sales volume and a 19 % decrease in median.

The number of condos reported sold during July stands at 97 currently with a median price of $325,000. Last July, there were 69 reported sold with a median of $390,000. This translates to roughly a 41% increase in sales volume and a 17% decrease in median compared to last July.

Looking at the numbers above, the condo numbers stand out the most. For most of 2011, the monthly sales numbers have been below or a little bit above the numbers reported for the same month of 2010. This July’s numbers were far better than July 2010. Is there a reason for the big discrepancy? I think there are a couple of factors at work. Overall, the 2011 condo numbers have been pretty solid. While they haven’t always quite fit the levels of the 2010 numbers, they haven’t had the same tailwinds so to speak. For the first half of 2010, anywhere between 15-40 sales were based on new development pre-construction contracts that date all the way back to the 2005-2006 time frame. I have referred to this quite a bit in my stats posts and dubbed the term the “Honua Kai Effect.” This may be among the last times you hear this term as July 2010 marked a month where long term pre-construction contracts dwindled to a meager three sales. Without the high number of new development sales, the comparison between 2011 and 2010 sales becomes more clear cut. Another factor is that July 2010 was also just a slow month overall for sales. It was the second slowest month in all of 2010. While July 2011 was solid, it does not mark any sort of big market resurgence.

While the home market posted modest increases in volume compared to July of 2010, the July 2011 market truly stood out due to a single sale. As previously reported in our Wailea midyear statistics, Maui has a new sales record for a home on Maui. Paypal co-founder Peter Thiel purchased a 1.6 acre oceanfront estate in Makena for $27,000,000. This year there has also been a new record high sale for Kapalua ($14,000,000) and as of yesterday the North Shore of Maui ($9,650,000). Needless to say, there are still buyers willing to pay an absolute premium for the best properties that Maui has to offer.

While we are seeing new record high prices for luxury properties, median prices continue to fall on Maui. Some of that decrease in median prices can be attributed to price decreases. Some of that decrease can be attributed to where market activity is occurring. The bulk of the REO and short sales are continuing to occur at the lower price points of the market. While there were some big sales last month, they aren’t enough to offset the greater volume of lower priced properties that continue to close.

What does this mean for buyers and sellers? Sellers should continue to keep a close eye at market competition and recent sales when determining how to price their home. REO and short sales remain formidable competition. While I think we can safely say it is a buyer’s market, buyers should be aware that they face their own set of challenges. Those who are thinking of buying and require assistance with financing should make sure to get pre-qualified prior to beginning their search. Strong credit and solid overall financial positioning are necessary to take advantage of the better financing options available. Buyers should also be aware that banks are closely scrutinizing the condition of the properties being purchased. Some of the bank owned properties that require significant improvements do not qualify for financing. While there are some very good values being listed, many of the best values are receiving multiple offers. These properties frequently sell over asking price. Contact the Maui Real Estate Team with questions or for assistance buying or selling Maui Real Estate.