Yesterday I posted the first installment of our 2010 Maui Luxury Real Estate Statistics. While that post looked at the statistics island wide, today I am looking at sales volume at a community level followed by some thoughts on the the stats and the state of the overall luxury market.

As noted on the previous post, the luxury home market saw a pretty healthy increase in sales volume. The table and the graph below show how luxury home sales compared between 2009 and 2010 at a community level. They also give you an indication of which communities saw the greatest demand from high end buyers. 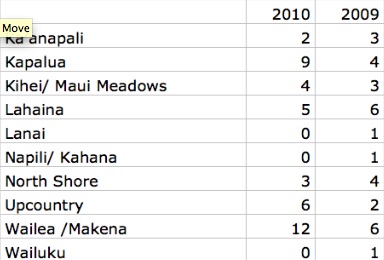 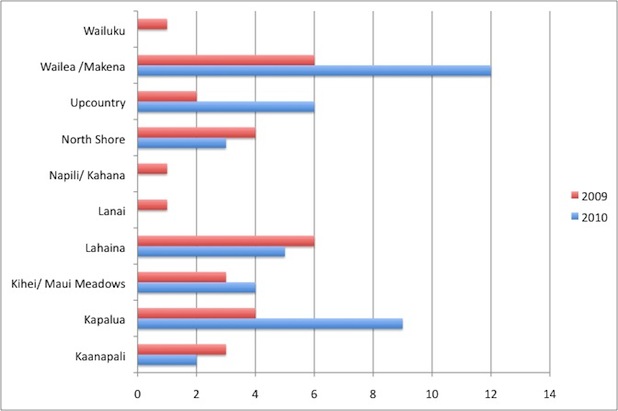 The condo market saw a very modest increase in sales year to year. The table and graph below breaks down luxury condominium sales at a community level. It is worth noting that the statistics for this segment of the luxury market need context. I will delve into this in greater detail during my commentary, but in general condo sales are skewed by new development sales based on long terms contracts. 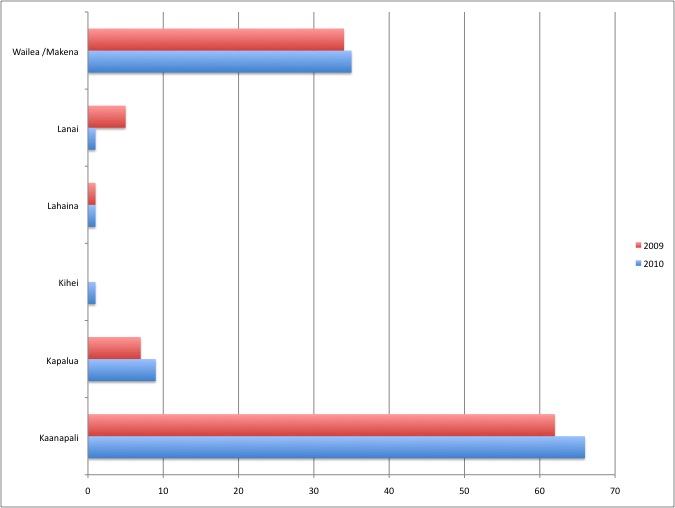 There is a lot of data to discuss between my two posts on luxury real estate statistics. I figured I would start with the luxury home market. Looking at the total sales numbers, the home market showed a healthy bounce back from the lows of the 2009 sales season. The resort communities of Wailea/Makena and Kapalua in particular led the charge. Both communities saw a 100% or better increase in sales volume year to year. Much of the growth in Wailea and Kapalua was at the highest price points of the market. Ten of the sales in Wailea/Makena were over three million dollars while 5 of the Kapalua sales were over three million. Upcountry is another area that saw a pretty healthy increase in sales year to year with a 200% increase in luxury sales.

It is also worth taking a moment to discuss some of the communities that saw luxury homes sales decrease. While two of the resort communities prospered in 2010, Ka’anapali saw a decrease in sales over $2,000,000. I am not sure that I can give a specific reason behind the lower sales volume at Ka’anapali. I would surmise part of the reason may be price decreases. Inventory that peaked over two million in Ka’anapali may have slipped beneath that threshold. Also, there is less three million plus inventory in Ka’anapali. Much of the surge in resort community buying was done above $3,000,000. The North Shore was another area where sales were down slightly. It is notable that two of the Upcountry sales were in a subdivision that closely borders the North Shore. Maunaolu Plantation is located between Paia and Makawao, but is classified as Makawao. Were those two sales to be attributed to the North Shore, that part of the island would have seen a slight increase in yearly sales.

Over the last five years condominium sales figures have been driven by new development sales. Many of the sales that were recorded in 2009 and 2010 were at Honua Kai in Ka’anapali. These closes were based on long term developer contracts that were originally inked four years prior. I have dubbed this the Honua Kai effect in a number of previous posts on Maui Real Estate statistics. This means that the sales numbers can give an inflated sense of current market demand. That being said, it appears that the impact was fairly equal both years with 49 long term new developer closes recorded in 2009 and 50 recorded in 2010. Ka’anapali’s position as the epicenter of luxury condo sales on the island can also be attributed to this development. New developments in general remained popular even if the contracts were shorter term. Hoolei has been a popular offering over the last two years. It was particularly big in 2009 with 14 new developer closes. That number shrank to 7 this year due in part to a decreased inventory. Papali and The Residences at Kapalua Bay are two other condominiums where new developer offerings contributed to the statistics.

Is there a reason why condos failed to mirror the growth that we saw in home sales? I can’t see anything at the surface that screams out to me. Lanai contributed more in 2009 due in part to big developer incentives, but that still only generated an additional four sales. We may also be seeing some of the inventory that had sold in the million and a half range slipping back under that threshold as the market adjusts. While the condo market failed to see the big boost in overall sales volume, it did mirror one aspect of the luxury home market. The area where activity increased the most was at the highest ends of the market. While there was only one close over five million in 2009, there were nine sales over five million in 2010.

I didn’t do a geographic breakdown of the land market in this post, but I thought it was worth a few comments. This market slid significantly from last year. I am not sure if I have a single reason that would explain the full extent of this shift. The 2009 numbers were bolstered by 11 sales at two new Makena land developments. That helps to explain some of the difference, but not all. Part of it may just be inventory and opportunities. The land market in general is very slow. Regardless of price point, the only lots that seem to be moving are those that are truly special or those that offer tremendous value. Luxury land buyers may not have seen as many opportunities in 2010.

Overall, this proved to be an interesting year for Maui luxury real estate. I have heard some claim that prices for the luxury market on Maui have hit bottom. I am not sure I can agree at this point. I think that sentiment is due in part to the new highest ever sales prices for a single family residence and a condo. It is clear that there are ultra high end buyers in the market who are willing to pay an absolute premium for extraordinary properties. That being said, the statistics point to other segments of the luxury market that remain relatively soft. There are communities and neighborhoods in the luxury market that have an abundance of inventory. An area like Ka’anapali comes to mind. There are currently 30 homes listed for over two million in Ka’anapali. Over the last two years, there have only been 5 sales in Ka’anapali in that price range. This strikes me as being a classic scenario conducive to additional price adjustments. Ka’anapali isn’t the only community in this situation. Even in the very desirable Makena, there is the Makena Place oceanfront development where half the homes are on the market. I think it truly comes down to supply and demand. Luxury communities or neighborhoods that offer limited but quality inventory will garner the most interest and hold value better over the next 12 months. Those communities and neighborhoods that have substantial inventory will need to adjust prices to attract today’s luxury buyers.

The 2011 luxury home market has the potential to continue to grow in volume. Solid visitor numbers and the strength of the Canadian dollar will help. Luxury condo resales may also see an uptick, but the overall sales volume may not reflect any improvements. Any increases will be more than offset by the lack of long term new development closes in the current pipeline. Most of the long term contracts at Honua Kai have closed at this point. The land market remains an enigma. The volume for the coming year will largely depend on the quality and value of listings that come on the market over the next twelve months. I should have some additional Maui real estate statistics posts to share over the next week on the Maui Real Estate Blog. In the interim, please feel free to contact the Maui Real Estate Team with questions or for assistance.

Well That Was Fun!

For most buying a home on Maui is a lifestyle…