This week’s edition of the musings dives into recent numbers from the Maui Luxury Home and Luxury Condo market. There is also an update on the end of the State of Hawaii’s Safe Travels Program and Mask Mandates, a look at the national real estate market and a little bit of Maui beauty to brighten your day.

As we approach the end of the first quarter of the year, it is worth taking a moment to check into see how the luxury property market is fairing on Maui. For the sake of this article, luxury is defined as homes priced for $2,000,000 and above and condos priced $1,500,000 and above. The numbers below are based on sales numbers between January 1st and March 21st. Here are the numbers followed by a few thoughts on the luxury home and condo market.

Some Takeaway from the Luxury Home and Condo Numbers

Volume may be down for homes, but that is more a function of reduced supply vs. decreased demand. The lower days on market and number of homes selling for at or above listing price support the notion of sustained demand and a more competitive market.

The impact of decreased inventory is also evident at the community level where places like Wailea and Makena are seeing lower sales volume due to decreased inventory. The Ka’anapali market and to an extent the Lahaina market are seeing lower sales for a few reasons. 1. Inventory is down at the lower price points of the luxury home market. 2. Some of the homes going under contract are “spec” houses with completion dates later in the year. Finally, some of the sellers are pushing the envelope on pricing. I mentioned the Lanikeha subdivision in Ka’anapali specifically in volume I of the market musings. The bulk of the inventory in that neighborhood is priced well above previous neighborhood high sales. To be fair, a couple of the higher priced homes have gone under contract since my post. That said, there are still quite a few homes available.

The increase in activity in new markets is also due to a combination of factors. We are seeing some homes selling above $2,000,000 due in part to appreciation. With price increases year over year ranging between 10 and 20 percent, some of last year’s below $2,000,000 sales are going for more money. Another factor is just plain old variability. Places like Haiku and Makawao both saw an increase in $2,000,000 sales over the last 4 years. It’s just that early 2021 was quieter in those communities. We are also seeing some luxury buyers expand their search outside the resort markets due to the lack of inventory.

The increase in activity in the condo market is largely due to better inventory selection compared to the luxury single family home market. That said, not all markets have an abundance of inventory. The Wailea and Makena area have lower inventory and it is reflected in the lower sales volume. We can see the impact of decreased inventory in some area of the luxury condo market in both the decreased days on market and the higher percentage of condos selling at or above asking price.

End of Safe Travels and the Mask Mandate

March 25th was the last day of the Hawaii Safe Travels program. Travelers coming to Hawaii will no longer need proof of vaccination or a negative covid test prior to arrival. It is also the last day of the indoor mask mandate in Hawaii. There are still requirements to wear masks on planes, buses, public schools and the airport.

While keeping tabs on the local market, it’s also worth keeping an eye on national trends. This is particularly the case in the current market as interest rates hit heights we haven’t seen over the last few years. The folks over at Altos Research have good access to pending sales data around the country. That gives you a little better sense of current market conditions than what you would get by just looking at sales data. Here is their video overview of the most recent data and it’s worth a watch.

If you don’t have the time to watch, here are a few quick notes. Inventory ticked up again although pending sales and pricing both appear to be strong. They are watching closely to see if the recent rates are impacting buyers. While they aren’t seeing any data to really suggest a change in market conditions, they spoke to a few things they are looking for that might indicate a potential slow down from the current frenzy. They mentioned listening for anecdotal signs of less active bidding wars. Altos suggested keeping an eye out for an increase on cancelled transactions and an increase in cancelled new developer contracts. Again, they haven’t seen that in the national data yet.

For what it’s worth, they aren’t expecting any seismic shifts in the market other than moderation of the current activity. The caveat being that a more significant shift could occur if interest rates were to settle over 5%.

Interestingly, there were a few more cancelled contracts on the Maui MLS last week. I am hesitant to read too much into the cancellations at this point. While it might be related to the rise in rates, it could also be a coincidence. It is something to watch a little more closely going forward.

A Little Bit of Maui Beauty

It was another beautiful morning on Maui today. I thought it was worth sharing this photo from Baldwin Beach with the West Maui Mountains in all of their glory.

Have questions on anything in this post? Need assistance buying or selling property on island? Just want to talk about a specific part of the market? Contact The Maui Real Estate Team. We look forward to being of assistance. 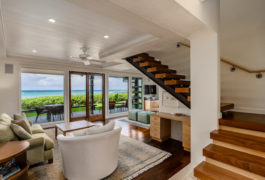