It’s June on Maui and that means a month of fun and festivals. Big events include The Kapalua Wine and Food Festival, The Taiko Drum Festival, The Slack Key Guitar Festival and the Maui Film Festival at Wailea. Before we turn the page on May, I wanted to take a look at how the Maui Real Estate market fared last month. I have been poking around the MLS today, trying to put together last month’s sales numbers. The numbers below are our Unofficial Maui Real Estate Statistics. These are preliminary numbers. There may be additional sales reported in the next few days. The Realtors Association will post their comprehensive official stats some time in the next ten days or so, but this allows you to get a sneak peak. Our unofficial stats are followed by a brief commentary and analysis. 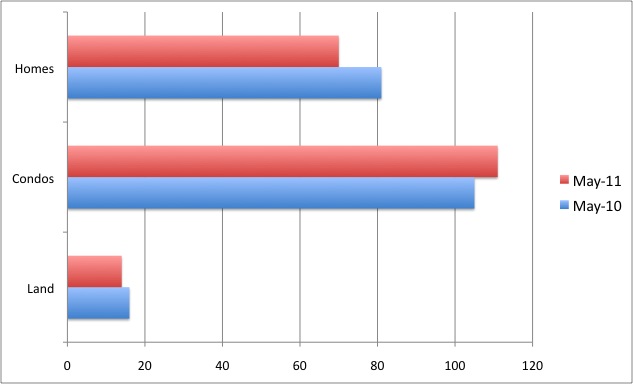 Bank owned (REO) and short sale properties have been a significant market driver since the real estate downturn commenced. As a result, we have been tracking the number of short sale and bank owned closes on The Maui Real Estate Blog. There were 50 REO closes and 23 short sale closes last month. This compares to 29 REOs and 24 shorts for May 2010. Of the 70 homes sold last month, 32 were shorts or REOs. That equates to 46% of the home sales during the month. Of the 111 condos sold last month, 34 were REOs or short sales. That comes out to roughly 31% of the condos sold. Of the 14 land transactions last month, 7 were REOs or shorts. That comes in at an even 50% of the land deals last month.

When looking at the numbers for last month, it is hard to identify any sort of consistent theme. There appears to have been a pretty healthy drop in the volume of home sales. Barring any late last minute closes, this is the second month in a row we have seen home sales volume lower than what we saw during the same month in 2010. Its still too early to say that there is a market trend developing, but it at least points to an uneven recovery. Conversely, condo numbers were up this month by a decent margin. The difference in sales numbers would have been even greater were it not for a boost from Honua Kai new development closes in May 2010. The Honua Kai Effect bolstered the May 2010 numbers with 19 long term new development closes. This compares to only 2 closes during May of 2011.

The one other thing that stood out to me about last month’s sales numbers was the high number of bank owned land deals. There are typically only one or two bank owned land sales every month. In general, many land owners on Maui own their properties outright. That has made this market segment less susceptible to REOs. So what caused the big uptick this month? Four of the six REOs were at the Lanikeha development in Ka’anapali. Lanikeha was a development that came on the market towards the tail end of the real estate boom. Financing was readily available, and one might surmise that there was some speculative buying. Its not clear if speculators intended to flip lots or build spec houses, but they were in a vulnerable position when market prices and demand dropped significantly. In general, newer developments that came to market at or near the end of the real estate boom have been more vulnerable to REOs.

As June begins, what can buyers and sellers expect in the current real estate market? My message hasn’t changed much from last month’s unofficial stats. This remains a buyer’s market. Buyers are continuing to find opportunities well below peak market pricing. That being said, buyers will find that the most compelling deals will attract strong interest and competitive bidding from other buyers. I can cite two recent examples. A new bank owned listing in Ka’anapali Hillside attracted heavy buyer interest last week. The bank cut the five day bidding period to four days after they received 13 offers including a number of offers well above asking price. I know there are a lot of curious agents and buyers to see how high the final sales price may be over asking. One of the aforementioned Lanikeha REO lots attracted another bidding war that resulted in a sales price 78% above asking. Buyers requiring financing should make sure they are pre-approved prior to starting their home search. Banks are giving extra scrutiny to borrower’s financial records. Sellers will continue to find the market provides tough competition especially if there are REO properties in their market segment. Buyers are looking for values and quality. Once their property goes to market, sellers would be advised to listen to market feedback and adjust prices accordingly. Contact The Maui Real Estate Team today with questions on these statistics or for assistance buying or selling Maui Real Estate.