The surf has been big and clean over the islands over the last couple of weeks. The national weather service just ended the high surf advisory that occurred over the last couple of days on the North Shores of the Hawaiian Islands. The South Shores also had a run of advisory level surf with another on the way. It is worth noting that the criteria for a high surf advisory varies by shoreline in Hawaii. While on the North Shores, it takes wave heights of fifteen feet on the face to generate an advisory. On South, East and West Shores the advisory level is much lower.

Here is a photo of some “smaller” fun surf on the North Shore of Maui from sometime in the last couple of weeks. Photo Courtesy of Daniel Sullivan. 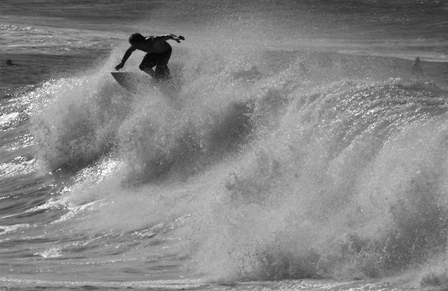 Another interesting note on wave heights. When it comes to looking at waves and surf forecasting, I have always relied upon The National Weather Service Forecast as a primary source. They do not provide a daily discussion, but they do a good good job reviewing both short and long term forecasts. Yesterday’s discussion brought a new aspect to the surf forecast. I have always assumed that forecasted wave heights covered the range of swell size on the sets. For example, on this last swell they forecasted heights between 14 and 18 feet. This is pretty large surf by any standard. However, when I was driving by the surf I noticed a few particularly large sets of waves that seemed to be bigger than what they predicted. I dismissed my observations as the byproduct of the doldrums between summer and winter surf. It had been a while since I had seen big surf and I thought my mind was over exaggerating the height of some of the set waves along our coast. Yesterday’s discussion and forecast indicated that I may not have been seeing things. The discussion revealed that the forecast of 14-18 foot swell heights was on the low end of observed heights. These were the wave sets that were coming in with a frequency of once every seven minutes or so. There were larger sets coming through every 20 minutes or so + or – every 10 minutes. There were still even larger “clean up sets” coming through every hour + or – 30 minutes. The result was that there were sets that were in the extra large range coming through every so often. This means faces of 20 feet or more. These are conditions that demand superior fitness and tremendous skill. Novices should steer clear of the water.