This is the last of a series of posts on midyear statistics for selected Maui communities. I have previously posted on the North Shore, Upcountry, Wailea/Makena and Ka’anapali markets. Last but not least, we are going to take a look at how the Kapalua market performed for the first half of 2011. Included below is information on overall sales volumes, medians, individual condo developments, high sales prices, low sales prices and a few other tidbits of data I dug up along the way. I followed the stats with a few thoughts on the numbers.

During the first half of 2011, there were four lots sold in Kapalua at a median price of $975,000. Needless to say, we outperformed the 2010 market when there were no land transactions recorded by midyear.

Looking at the numbers above, the first half of 2011 was positive overall, but there were some mixed signals in the market. Looking at the home market, there are some signs of improvement over last year. There is a clear increase in sales volume. We also saw a new record high sale. In addition to the record sale, there was another substantial sale at $9,600,000. Conversely, one sale at Pineapple Hill was the lowest priced single family home to close in Kapalua since the year 2000. It appears as if the Kapalua market is in line with the Wailea and Makena market in that we are seeing continued price decreases on a majority of properties. That being said, as with the Wailea and Makena market, there are some premier properties where the buyers are willing to pay an absolute premium.

The land market for Kapalua saw limited sales with four transactions, but that is a clear improvement over the complete absence of sales during the first half of 2010. The other thing to note on Kapalua’s land market is that the inventory is lower than the other Maui resort communities. Land sales for Maui in general have been very slow for almost four years. In that time frame, the island has compiled a surplus inventory that could take as long as 6 years to absorb based on recent sales volumes. The Kapalua market on the other hand has less than two years of inventory to be absorbed. Barring a drop in demand or a big influx of supply, this market may stabilize faster than other land markets.

The condo market was the one segment of Kapalua that clearly did not perform as well during the first half of 2011. Sales volume was down vs. the first half of 2010. Median prices were also down. While I think some of the drop in median can be attributed to decreases in values, there were also a few more million dollar plus sales last year which pushed the medium up. That being said, It looks likely that we are going to need to see some additional price adjustments in the Kapalua Condo Market to entice buyers. While other communities have been thinning condo inventory, Kapalua still has a substantial stock of condos for sale in light of the area’s average monthly sales volumes.

Contact the Maui Real Estate Team if you have any questions on these statistics or if you have interest in buying or selling property in Kapalua. You can search the entire inventory of Kapalua Homes for Sale and Kapalua Condos for Sale on MauiRealEstate.com.

A couple of weeks back, I decided to take a more in depth look at how the real estate market performed for the first half of 2011 in a handful of specific Maui communities. I have already posted statistics for the North Shore and Upcountry markets. I had originally intended to post one last blog on how the resort communities performed. That being said, I found the abundance of data to be a little overwhelming for one post. Instead, I will be posting three blogs looking at the communities of Wailea/Makena, Kapalua and Kaanapali respectively. This first post looks at the Wailea/Makena market. It includes information on sales volumes and medians for home, condo and land sales. I also have a further breakdown of condo sales volume by complex as well as some additional information that I came across in the process of sorting through the data. I also offer some thoughts on what the statistics may mean. 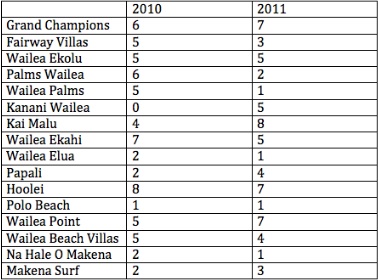 Looking at the numbers above the dip in home sales sticks out the most. The Wailea market and the Makena market in particular made a big splash in the first half of 2010. There were two sales of over 17 million dollars including a new record sales price for a single family home. There were also 6 sales in Makena including four with sales prices over $5,000,000. We just didn’t see that level of activity during the first half of 2011. The majority of the ultra high end activity was occurring in Kapalua Resort and along West Maui’s Oceanfront.

Does this point to a shift in the preferences of high end buyers? Has the Wailea and Makena area lost its luster? Plain and simple, the answer is no. I am publishing these stats a month after the official midway point for the year. That gives me the advantage of an additional month to observe the market. July has been busy for the Wailea and Makena luxury home market. Shock waves reverberated through the Maui market earlier this month when an unlisted property in Makena sold for $27 million. The 1.6 acre oceanfront estate shattered the previous single family home sales record. There are two homes listed for over $7.5 million that are now under contract at Makena Place. A home listed for $16.5 million went under contract at Keawakapu Beach. There is a second unlisted property along Keawakapu Beach under contract. While its sales price is unknown, the property had been listed in the last year for $23 million. A month of additional market activity has completely changed the tenor of the Wailea and Makena luxury home market. I enjoy compiling the data for these blog posts and they provide a good snap shot of market activity. That being said, there are some dangers when you try to read into the data too much or you call something a trend when dealing with these relatively small sample sizes.

While there were some pretty big swings in home market activity, the condo market was almost a mirror of 2010 in terms of total sales volume. We saw some subtle shifts in the composition of sold properties with an increase in bank owned closes and short sales. The volume of sales at individual complexes also fluctuated. Kanani Wailea and Kai Malu saw the biggest jump in sales volume while Wailea Palms and the Palms Wailea saw the sharpest decrease in volume. I am reticent to read too much into these shifts in market activity. It may just be variability. That being said, I wouldn’t be surprised to see higher sales volumes continue at both Kanani Wailea and Kai Malu. These are both complexes that came to market near the peak. Most condos in these complexes are now valued below their original sales prices. Declines in value combined with speculative purchasing when these properties came to market have resulted in REOs and short sales. I suspect Kai Malu and Kanani Wailea may still have some REO and short sale inventory to work through.

While most of my discussion has focused on volume, it is worth discussing median prices as well. As the numbers show above, we saw condo medians increase while home medians decreased. Whether it is an individual community like Wailea/Makena or Maui in general, I am reticent to use changes in median as an accurate measure of changes in property values. With these smaller sample sizes, shifts in median can be also be attributed to shifts in where market activity is occurring. For example, greater concentrations of high end sales can raise median prices while increased sales activity among lower priced condos can pull medians down. While I lack clear quantitative evidence, I would argue that Wailea and Makena may still be seeing modest drops in value for most properties. That being said, we are also seeing very affluent buyers who are willing to pay an absolute premium for some of the extraordinary properties that are for sale in this resort community. While comparable sales may dictate the market value of some properties, other sales may be more a matter of finding the common ground between what a buyer is willing to pay vs what a seller is willing to accept.