I live just up the road from Kai Makani. My family and I often enjoy the beaches that run in front of this North Kihei condo. In the summer, we enjoy playing in the summer surf on our stand up paddle boards. During the winter, the summer swell has given way to calmer waters. From the sands in front of Kai Makani, we can now enjoy the frequent whale sightings and the sun setting further south over the open ocean. Since my last Kai Makani blog post, I have kept a close watch on sales activity in this complex and wanted to give some highlights. 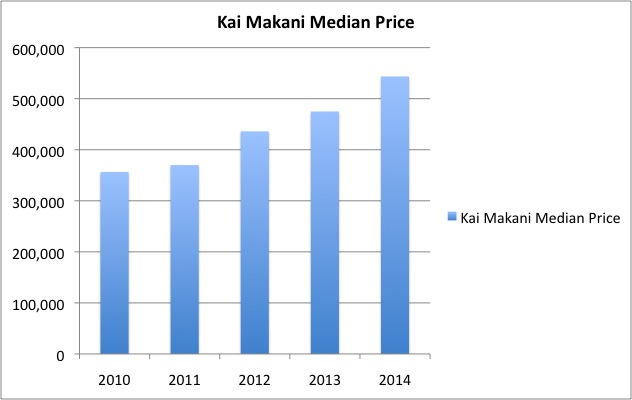 When comparing 2014 to 2013 median and average pricing, a first glance suggests significant rates of appreciation. Median sales price grew from $475,000 to $543,500 (14.4%) and average sales price grew from $487,923 to $541,190 (10.9%), year over year. There is likely more to the story. As it is with the Maui Real Estate Market as a whole, there are many nuances and layers of information hidden behind the numbers within a single complex and we must peel the onion to find out what’s inside.

It is interesting to note that 70% of the 2014 sales were 3 BR units, and the remainder were the largest of the 3 different 2BR floor plans. This is further punctuated by the fact that 3BR units make up only 36% of the total units at Kai Makani.  2013 was different as we saw a mix of floor plans including 3 sales of the smallest available 2Br units. Only 23% of the 2013 sales were 3BR units.

In addition to the square footage and floor plan, the location within the complex is also highly determinative of value. Units toward the front, particularly with direct ocean views command a higher price.  I mapped out the distribution of sales within the complex for both years and they appear quite similar.

Some of the appreciation we see year over year is a function of simple square footage.  There were more large units, particularly 3Br units sold in 2014 than in 2013.  But to what extent?  I wanted to try to get a handle on a more accurate representation of  value. When I eliminate the smaller apartments from the 2013 figures and run the numbers again, I’m still finding a healthy 5.5% increase in median, and a 8.6% increase in average pricing for 2014.

You can check out the current inventory of Kai Makani Condos for Sale on MauiRealEstate.com. Contact The Maui Real Estate Team for direct assistance.

Situated directly across the street from Maui’s longest stretch of white sandy beach, Kai Makani Beach Villas is one of Kihei’s finest and most recently built condominium communities. The tropically manicured 10 acre grounds host 112 units within 22 – two story buildings.  Plenty of open space coupled with a village like atmosphere make this a fantastic headquarters for living life on Maui.

There is a lot to like about this community. I am definitely partial to the location and happen to live right around the corner. Our family thoroughly enjoys the Kai Makani lifestyle; whether we are stand up paddle boarding, watching the whales frolic in Ma’alaea Bay during the winter, surfing south swells in the summer or snorkeling with the honu (green sea turtles) at the coral reef less than 100 yards from the shores. The vantage point for sunsets is among the best on Maui. The centralized location of the neighborhood provides easy access to almost any point on the island.

There are five distinct floor plans at Kai Makani. They include four 2 bedroom/2 bath configurations ranging from 811 to 1,126 square feet. There is one 3 bedroom/2 bath option that is 1,238 square feet. Overall, there are seventy-two 2 bedroom floor plans, and fourty 3 bedroom units. Short term or “vacation” rentals  are not permitted in this community. It is geared toward owner occupants and second home owners. There is a smattering of long term tenants, a fair amount of owner occupants and some owners who strictly utilize it as a vacation home. Pride of ownership is evident throughout.

Of the seven sales at Kai Makani in the past six months, six of these units were 3 bedroom floor plans. The lone 2 bedroom sale closed at $460,000. Pricing for the 3 bedroom units ranged from $520,000 at the low end and $595,000 for a front row ground floor unit with direct ocean views at the high end.

You can see all of the current inventory of Kai Makani Condos for Sale on MauiRealEstate.com.