This week’s market musings takes a look at one sign of resilience evident in the market and the latest Redfin report on the second home market. Without belaboring the intro, here are the latest market musings.

Entry level condos in Kihei experienced some of the steepest declines during the last real estate crash. I remember the turning point for that market pretty well. During the Summer and fall of 2005, places like Southpointe, Kihei Villages and Keonekai Villages experienced rapid price increases. Condos in these complexes jumped in value 25% or more in a span of about 6 months. The rise in prices occurred during a period of low rates (for the time) with rates forecast to increase. Inventory during this period was low.

A pretty drastic shift occurred in the market in early 2006. A number of the buyers who purchased the condos in the second half of 2005 were pure speculators. They planned to make some very rudimentary improvements prior to flipping the condos. In some cases, they were just naked flips where they purchased the condo and flipped a few months later with no improvements made. By early 2006, the inventory ballooned from a handful of listings in entry level complexes to as many as 25 units in a single development. A rate increase between .5% and .6% caused demand to cool. Sellers who didn’t have the reserves had to adjust their prices. Thus started a precipitous decline that grew worse as a number of sellers found themselves underwater.

The contrast with present conditions is pretty significant. Recent mortgage rate increases are far more drastic. We are looking at an increase of 1.5% in the span of less than 6 months. That said, inventory levels remain low. At the time of this post, there are only 4 active listings in the “entry level” condo complexes in Kihei. Buyer demand continues for the limited inventory. Four non-vacation rental condos in Kihei went under contract within the last few weeks.

While market conditions may continue to shift depending on further rate increases and/or the overall economy, this segment of the market isn’t the house of cards that it was in the mid 2000s. There are fewer speculators and the financial position and loan terms of borrowers are stronger. The market conditions that caused the calamitous collapse in values just aren’t present currently. That’s why we continue to see buyers despite the significant rate increases and much higher prices.

Recent data presented by Redfin indicates that second home demand hit its lowest point since May of 2020. While it is still up from pre-pandemic levels, the decrease in demand is notable. Redfin cites affordability as one factor in the decreased demand. Some of that stems from price increases and some from rate increases. The Federal Housing Financing Agency also announced an increase on upfront fees on second homes starting on April 1. The fee increase is between 1.125 percent and 3.875 percent, tiered by loan-to-value ratio. That’s a pretty hefty number for those borrowing substantial sums.

Will we start to see this reflected in the Maui market? I haven’t seen signs of a clear decrease in the second home market on Maui. Demand appears to remain strong with inventory limited. We also have a lot of cash in the market. Of the vacation rental condos that sold over the last month, 44% were cash transactions. That might be a low number as it doesn’t include 1031 exchange purchases using cash. The lack of inventory may also make it harder to detect changes in buyer demand. If we start to see anything that shows Maui reflecting national trends, we will report it in the Musings

A Little Bit of Maui Beauty to Brighten Your Day

A quick clip from Maui’s North Shore. If you are on twitter, @maui is worth a follow for more local eye candy, travel tips to the island and more.

If you are reading some mixed messages in recent musings, that’s because information on market conditions remains pretty mixed. On the ground, buyers are still facing bidding wars and properties are still selling for premiums. That said, there are more headwinds brewing with the rise in rates. Current market conditions call for quality representation. Contact The Maui Real Estate Team if you are considering entering the Maui market as a buyer or seller.

Keonekai Villages 14-103, A Case Study for Buying vs Renting

Rents are rising on Maui. Borrowing costs remain low. In this type of market, a place like Keonekai Villages 14-103 is a compelling buy if you have money set aside for a down payment.

Keonekai Villages 14-103 is listed for $257,000. With 5% down at an interest rate of 3.92%, monthly mortgage payments are $1,154 a month. The current maintenance fee is $274 a month. That includes, water, trash, refuse and basic cable. Insurance would run roughly $300-$350 a year or $25 to $29.17 per month. That comes to $1,457.17 per month. Other expenses would include electricity, Internet and property taxes. The current owner is paying a $1,694 in property taxes annually. If you are a Maui Resident who paid local taxes in 2015, you could be eligible for a lower homeowner tax rate as long as you file for the new rate before the end of the year. With exemptions, your taxes would be $500 or less. I searched Craigslist to see if I could find any rentals in Keonekai Villages that might be comparable. The only recent listing I could find was asking $1,600 a month plus electricity. A Maui resident paying homeowner tax rates would be paying less to own the condo than the cost to rent. 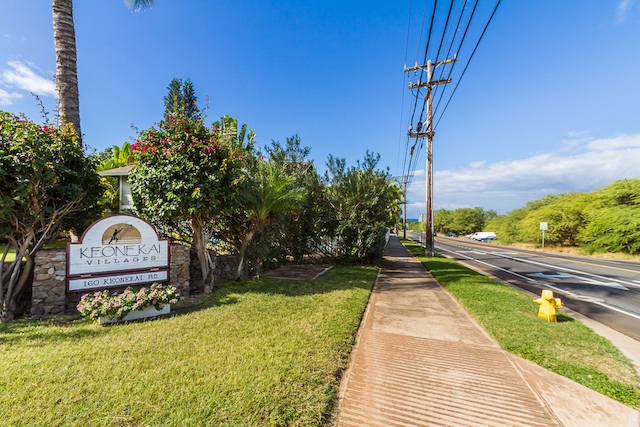 Keonekai Villages 14-103 isn’t just a case study for buying, it also offers a great location. It is situated within a few blocks of the Kamaole II and III Beach Parks. These are some of the best swimming and snorkeling spots in South Kihei. Shops and restaurants are also within walking distance of Keonekai. The beaches and amenities of Wailea and Makena are anywhere from two to ten minutes drive.

This condo sold in 2016. Calculations on condo ownership changed with the Covid Real Estate Boom. Contact The Maui Real Estate Team if you are a first time home buyer to discuss the current pros and cons of buying in this market.