Today’s blog looks towards leeward Haleakala and the beautiful beaches, stunning views, and high end amenities of the Wailea Resort. We wanted to take a look at how the Wailea market fared through the year to date. This post includes information on Wailea Home and Condo sales as of September 22, 2021. It is also worth noting that this looks exclusively at properties in the Wailea Resort itself. Our MLS groups Wailea and Makena together. I plan on doing a separate post on the Makena market some time next week.

Needless to say, the numbers above point to a robust eight plus months of home sales in Wailea. While many second home markets took off in the spring and summer of 2020, Maui’s market remained relatively quiet due to quarantine requirements. We started to see an uptick in buyer activity after the governor lifted quarantine restrictions in October. Buyer activity started to increase during those last few months of 2020. It hit a whole other level in 2021. I checked the MLS data going back to 2003. Only January-September of 2005 came within 10% of this year’s total.

While this spring marked the peak of the frenzy, buyer demand remains strong. Inventory, on the other hand, is particularly limited. There are only eight active home listings for sale within the Wailea Resort. An additional seven homes are under contract. Barring any significant changes in the global economic picture or an unexpected influx of new listings, Wailea should remain a seller’s market through the rest of the year with sales volumes slowing due to the lack of inventory.

Thoughts on and Outlook for the Wailea Condo Market

Like the Wailea home market, the Wailea condo market experienced strong activity through the first nine months of the year. Also like the home market, the trajectory of the market showed a similar pattern over the last 18 months. It was a slower spring and summer of 2020 as the island felt the impacts of Covid-19 and a lack of visitors. A gradual ramping up of activity followed when tourism reopened in October. The start of the new year brought a whole other level of interest in Wailea Condos. We entered the year with a fairly balanced market between supply and demand. That shifted as buyers ravenously chewed through the market inventory. As with the home market, we are seeing all time high levels of sales activity for the year to date.

With high levels of demand and a shrinking supply, we also experienced a lot of upward price pressure in the market. With variability in value between units, it is hard to quantify the exact levels of appreciation. If I were to guess, I would saw 10% or greater appreciation is quite likely with variability between some of the different developments.

As for the outlook for the rest of the year, it really comes down to inventory. Plain and simple, the active condo inventory is shockingly low. At the date of this post, there are 6 active condo listings in all of the Wailea resort. There are active listings at only four of the seventeen condo developments within Wailea. Needless to say, this will constrain sales volume unless we see a considerable uptick in active inventory. It will also lead to some upward pricing pressure. 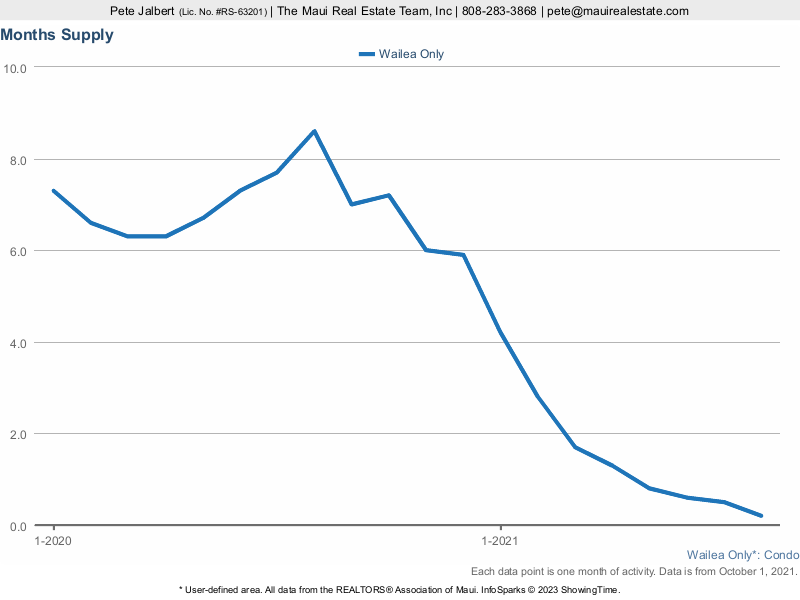 Contact The Maui Real Estate Team if you are interested in buying property in Wailea. We would be happy to keep our eyes and ears open for new inventory or unlisted properties. You can also keep tabs on the current inventory of active Wailea Condo listings and Wailea Homes for Sale on MauiRealEstate.com. I don’t think you could find a much better time to go to market if you are a Wailea property owner thinking about selling. Send us a message or give us a call to arrange a free consultation and an estimate of the current market value of your condo.