This picture perfect Pukalani home just hit the market! The seller and the previous owner frequently remodeled the home over the last twelve years. The end results are fantastic indoor and outdoor living spaces. 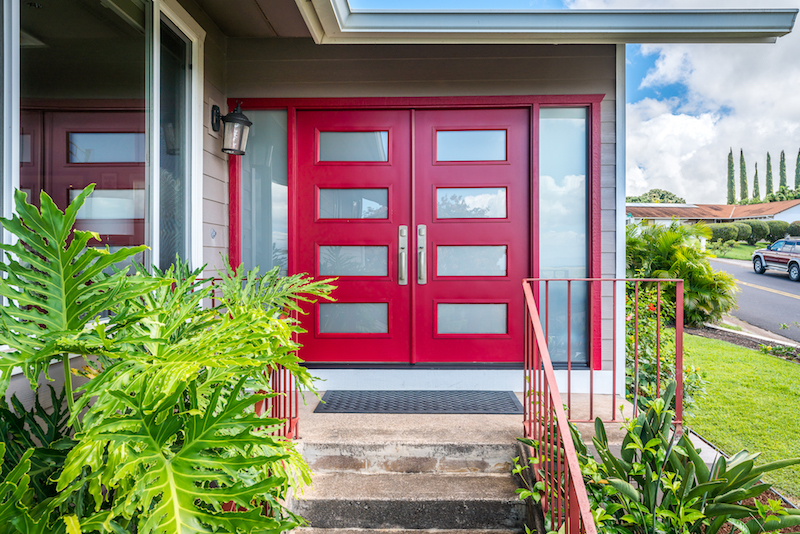 This home stands out from the moment you come to the bright red, custom, Codel front door. Open the front door and you enter the living room with its vaulted ceilings and striking tiger wood floors. The living room also has big windows that allow lots of natural light and big panoramic views of majestic Haleakala. A Nelson Saucer Pendant Light and double hung blinds on the windows are nice additions to the space. There is a small reading nook off the living room with another big window adding more natural light. The living area is cooled by a split system a/c. 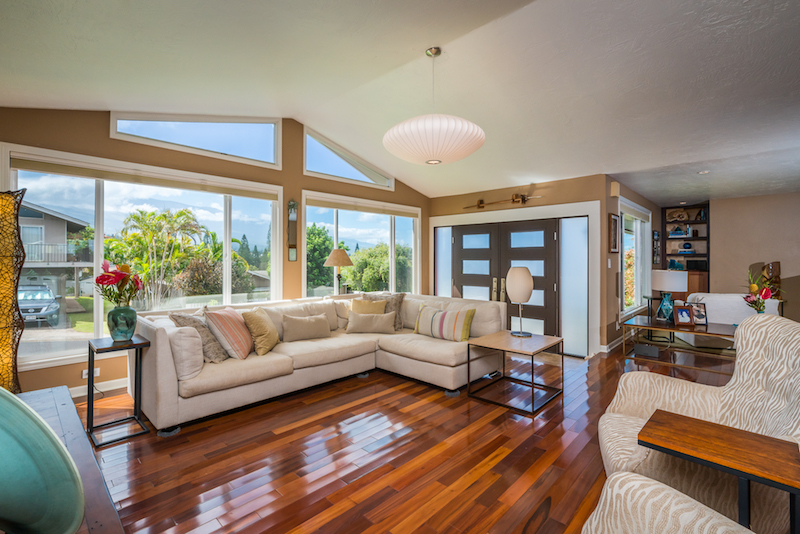 Just off the living room is the well appointed kitchen. The custom two tone cherry cabinets are beautiful and functional. They feature a lot of nice built ins like the pull out spice rack. The countertops and the back splash are slab granite. The kitchen floor is porcelain tile. The sellers installed new stainless steel appliances in the last year. 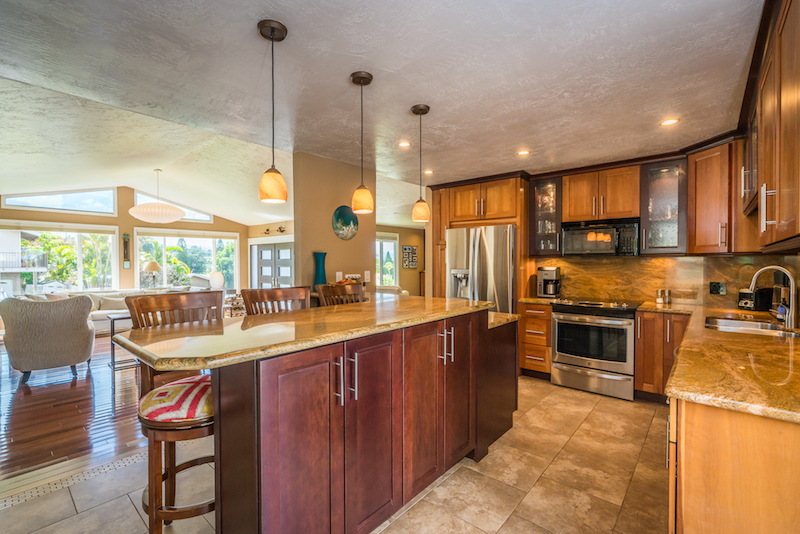 The rest of the living area is all on the same level with three beds, two baths and a laundry room. Central a/c keeps this side of the house cool on warm sunny days. The good sized master suite has new Pella Sliding glass doors that open on to the back deck. The master bathroom is sumptuous. The pebble floors soothe your feet. The pedestal sink has a rainforest granite slab. A motion light under the sink is a nice touch for those middle of the night trips to the loo. The oversized shower has travertine walls with a rainforest granite threshold. An overhead rain shower is complimented by body jets and hand sprayers. 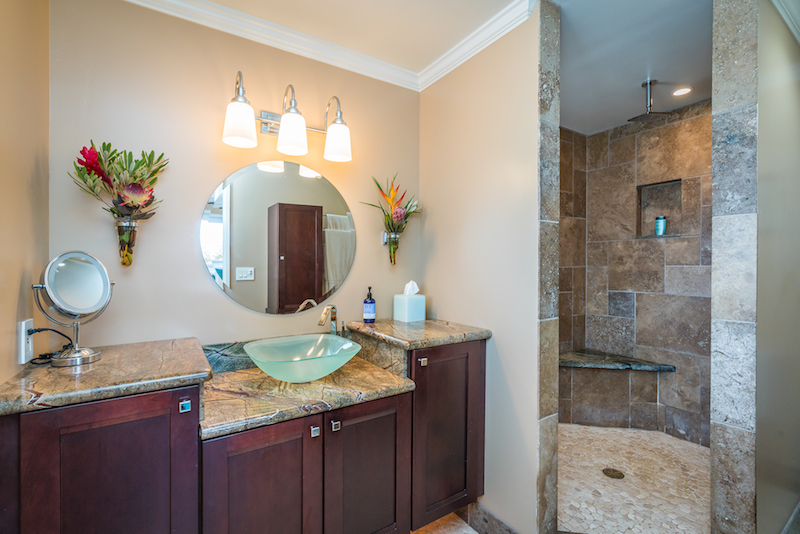 The quality of the indoor livings spaces are matched by the equally compelling outdoor spaces. The large back deck made of durable and attractive Ipe offers a great place for entertainment. A six person hot tub will get good use on cool Upcountry evenings. The sellers also built a back wall of Ipe and stone that compliments the deck. A roof top deck offers 360 degree views of Haleakala, The West Maui Mountains, Kahului Harbor and Ma’alaea Bay. The back yard is fully enclosed offering security for pets or kids. The yard and landscaping stays green and vibrant year round thanks to the sprinkler system. 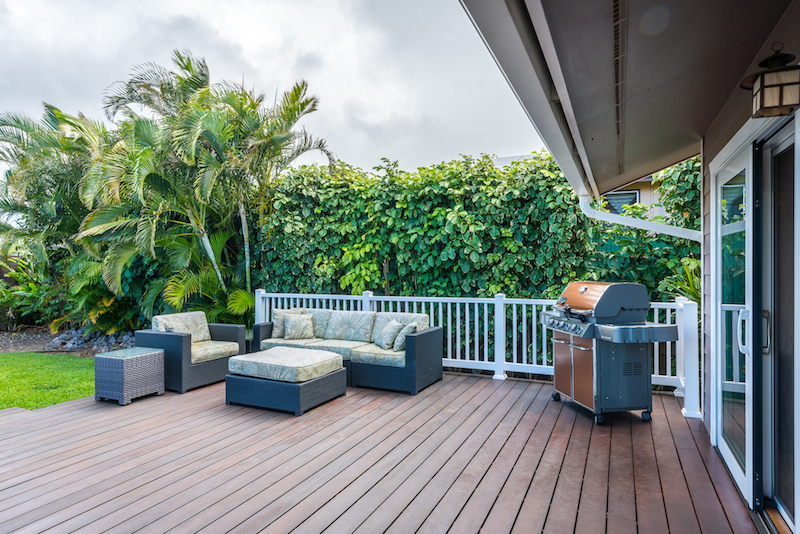 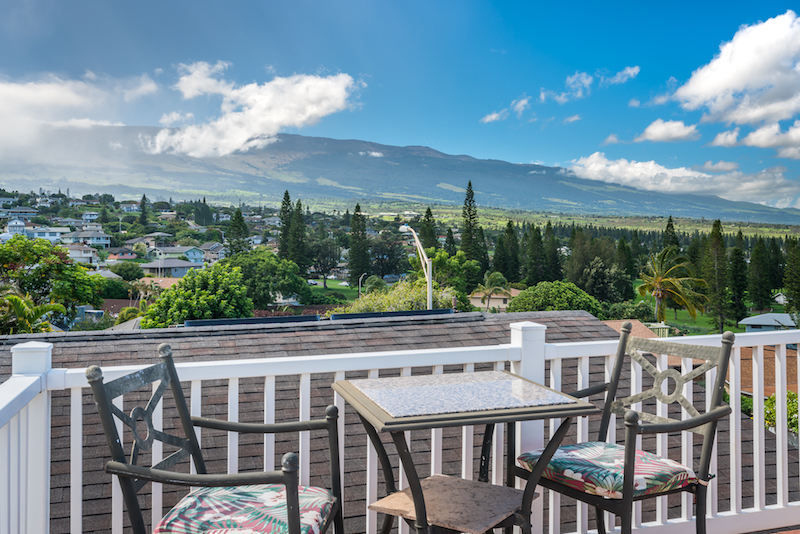 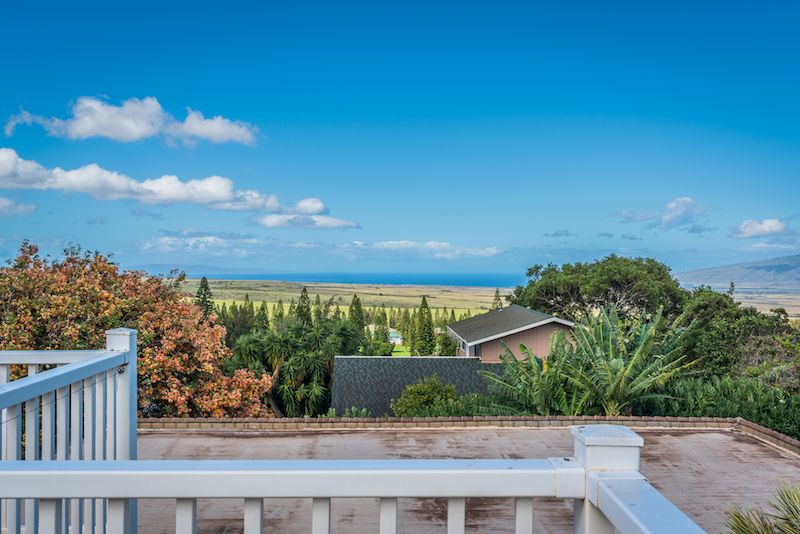 Some other notable features of this Pukalani Home include: 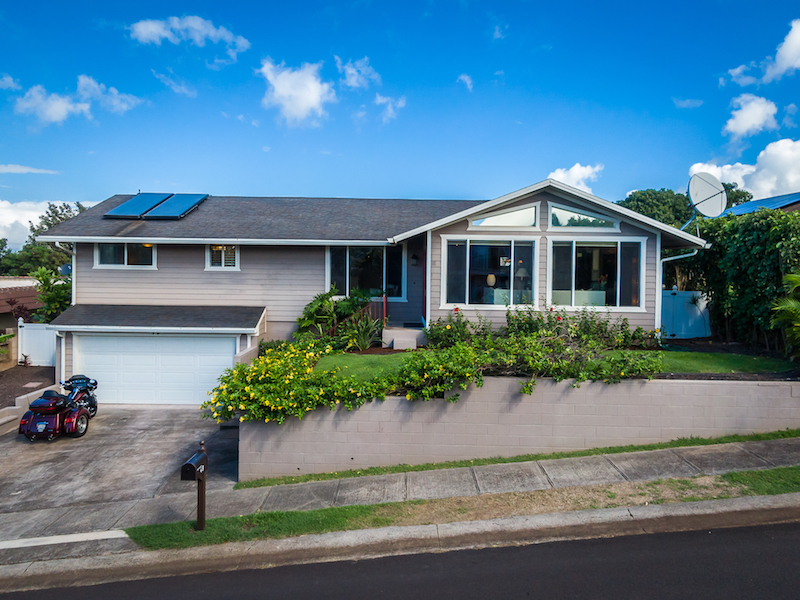 The home is just minutes from the Pukalani Community Center’s walking trails and pool. Foodland is just a two minute drive if you need to pick up groceries. The shopping and amenities of Central Maui are less than twenty minutes drive down Haleakala Highway. It is 25 minutes or less to North Shore Beaches like Kanaha, Baldwin and Ho’okipa.

This picture perfect Pukalani Home is offered for $825,000. This home sold in 2018. Contact The Maui Real Estate Team for assistance with other homes in Pukalani.

After looking at the North Shore communities of Paia and Spreckelsville, I wanted to head up the slopes of Haleakala to Pukalani. This Upcountry community has seen strong buyer activity over the last few years. Pukalani’s good weather, panoramic ocean views and easy access to Central Maui are all draws for buyers.

Thoughts on Overall Pukalani Market Activity for the Year

The Pukalani market has seen tight inventory for the better part of the first eight months of the year. The lower sales volumes for the year speaks more to the lack of inventory than a decrease in buyer demand. The limited supply is also a factor in the increase in both the median and average sales price. The limited supply of homes is contributing to upward pressure on home prices.

Looking at Some Specific Neighborhoods in Pukalani

The Pukalani Real Estate Inventory is diverse. There is a range of lot sizes and property types. With that in mind, I wanted to drill down into a handful of specific neighborhoods and subdivisions to get a sense of how they are faring this year compared to years past.

Kula 200 is completely unique in Pukalani in that it is a neighborhood of two plus acre agriculturally zoned lots. Located right on the border of Kula, it offers a location that balances low density, privacy and convenience. The neighborhood has the highest price point in the Pukalani area. Kula 200 has seen a relatively quiet 2018 with one sale, two pending sales and one active listing. By comparison, there were two sales in the neighborhood during the first eight months of 2018. Looking at a broader time frame, the number of homes sold in the first eight months of the year ranged between zero and four going back to 2011. This is not a high turnover neighborhood.

The Cottages at Kulamalu is a collection of residential condos that includes stand alone units and duplexes. This development was originally constructed in 2008. It wasn’t 2011 that all of the units in the development sold. Since 2015, there have been 3-5 sales a year at the Cottages. It looks like we are going to see a similar pace for 2018. There have been two sales for the year to date, with two active listings.

The Residences at Kulamalu is a collection of homes on and across the street from the Pukalani Golf Course. Originally sold as vacant lots in the early 2000s, the neighborhood was built out with quality homes. As a result, it has seen some of Pukalani’s highest sales prices outside of Kula 200. There have been between one and four sales every year in the development over the last five years. This year, there have been two sales with one active listing on the market.

Pukalani Outlook for the Rest of 2018

Constrained supply is likely to keep market dynamics similar in Pukalani for the rest of 2018. Interest rates are something to keep an eye on towards the end of the year. We know interest rate increases are coming. Thus far, they have not put too much of a damper on the market. That said, we may start to see it become a source of friction to buyers if it starts to really compound affordability issues. Contact The Maui Real Estate Team if you are thinking of buying or selling a home in the Pukalani area. We would be happy to sit down to discuss your real estate needs. Check out the current active Pukalani Real Estate Listings on MauiRealEstate.com

I begin this post with a humble apology. Last month was the first time that we have failed to provide some version of the monthly Maui Real Estate stats since 2008. For those that have come to expect this place to be the first resource to go for getting a pulse on the Maui market, I apologize for letting you down. If you didn’t see last month’s stats via another media outlet, here is a link to the Realtor Association of Maui March Stats. I will try to redeem myself with an expanded post that includes a cornucopia of Maui market numbers. April is a month of transition in Maui. It is the end of whale season, peak tourism season and peak real estate season. The real estate sales figures are typically pretty strong as we see lots of closes from properties that went under contract earlier in peak buyer season. Keep reading to see the April sales volume and median numbers, a few interesting numbers and tidbits from among this month’s closes, a broader look at the first four months of the year, some forecasting as to what we may see for sales in the coming months and a few other thoughts on the Maui market. Without further ado, here are the numbers.

These are preliminary numbers, we may see some additional sales reported from the end of the month in the next couple of days. While compiling the numbers above, I found a few other numbers that I thought were worth sharing.

This months stats were almost directly the inverse of last month’s stats and the overall trends for the year. Home and land sales were higher in April of 2014 than they were in April of 2013. Condo sales were down compared to last April. Overall for the year, we have seen higher condo sales while both land and home sales have been lower. I wouldn’t read too much into one month’s trends as we are likely just seeing some of the variability we tend to see with Maui’s smaller sample size of transactions.

I also thought it was worth looking at changes in sales activity by price points during the first four months of the year.

The numbers above would seem to indicate that recent market activity is being dictated in part by available inventory. The only part of the market that is seeing less activity is the part that has seen inventories decrease the most in the last year. There are buyers looking at lower price points, but they aren’t finding the properties that they want. The increase in activity at the higher price points also accounts for some of the increases we are seeing in median prices. It is a combination of price increases and more high priced transactions that are causing the jumps in medians. Don’t mistake increases in medians as a true reflection of increases in values.

The numbers show a pretty sharp dip in both homes and condos. It will be worth keeping a close eye on May pending sales to see if we are seeing something of a trend or if this month is just an anomaly.

What does all of this mean for buyers and sellers? Buyer and seller strategy is going to be dictated in part by community and price point. That said, there are a few statements applicable to all geographies. Entry level buyers are going to find a limited inventory and competitive market. Getting pre-approved for financing is a must prior to starting your search. When you find a property that you like that is well priced, decisive and fast action is typically necessary. Some of the higher price points in the market offer a broader range of inventory, but seller motivation tends to go down. Buyers may find that the staying power of luxury home owners can undercut their leverage even in markets with lots of inventory. Sellers who need to sell in quick fashion will need to look closely at recent comparable sales and the level of market activity around their price point. Over priced properties are sitting in this market. Current market conditions can be challenging for both buyers and sellers. The Maui Real Estate Team would welcome the chance to sit down for a free consultation to discuss your real estate needs and how we might be able to help you navigate the market. Contact the Maui Real Estate Team today to get started.