The Maui Real Estate Team is proud to present a stunning Spreckelsville Oceanfront Estate. This property consists of 3.4 acres of sprawling loans and beautifully landscaped lawns. There is a beautiful lagoon style pool with an adjoining waterfall and a smaller wading pool. A bali style gazebo is ideal for entertaining friends and guests by the pool. The home is as much a work of art as a domicile. Stunning views, spectacular woodwork, zen design elements, sumptuous bathrooms and an enormous and airy living room are some of the features of the 5,409 square foot home. Ocean sports enthusiasts will love the windsurfing and Stand Up Paddle Surf spot located right out back. The ideal North Shore location is close to lots of other great beaches and surf breaks. The town of Paia and all of its great shops and restaurants are five minutes away. The shopping and amenities of Central Maui are also close by.

It is almost February, but I still wanted to take a look back at how some of the individual communities on Maui performed in 2011. I thought no better place to start than our own back yard, the Paia Real Estate market. The Paia market ranges from modest entry level homes to beautiful oceanfront estates. We saw activity in all segments of the market in 2011. I have included the sales numbers below as well as a few thoughts on the market. 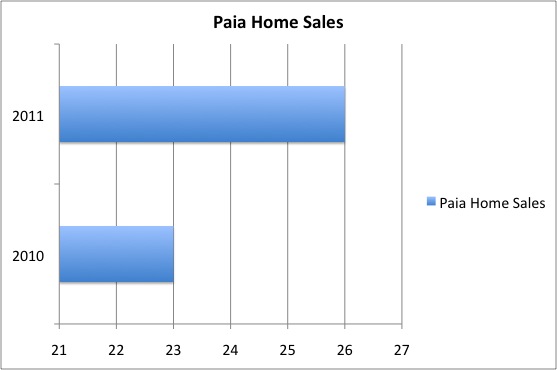 In 2011, the Paia real estate market saw the highest ever sale along Maui’s North Shore. A beautiful oceanfront estate in Spreckelsville with an acre of land and two homes sold for $9,650,000. On the other end of the spectrum, there was a 500 square foot residential condo in Kuau that sold as a short sale for $168,000. That was the lowest priced sale we have seen in Paia going all the way back to 1999.

Overall, the numbers show that the Paia Real Estate market saw improvements over 2010. The 13% increase in home sales was a little better than the 10% increase for home sales throughout Maui County. The increase in median offers little for determining changes in values. The small sample size plays a factor. The increased activity on the high end of the market is also providing an upwards pull on the median. I would expect to see a similar performance for the Paia Real Estate Market in 2012 barring any big changes in the overall economic picture. If you are interested in purchasing a home in Maui’s quirky North Shore Beach town, you can browse the current inventory of Paia Real Estate listings on MauiRealEstate.com. You may also contact The Maui Real Estate Team directly for additional assistance buying or selling Paia property.

**2010 figures include two sales that were not reported on the Maui MLS that did not involve Realtors.