Why is the Maui condo market showing signs of improvement in 2016? That is one of the questions, I asked myself in this post and did my best to answer by taking a deeper dig into this year’s condo sales. You will find all of those thoughts and a rundown on the overall July 2016 Maui Real Estate Stats. Without further ado, here are the July numbers and some thoughts and context on the market. 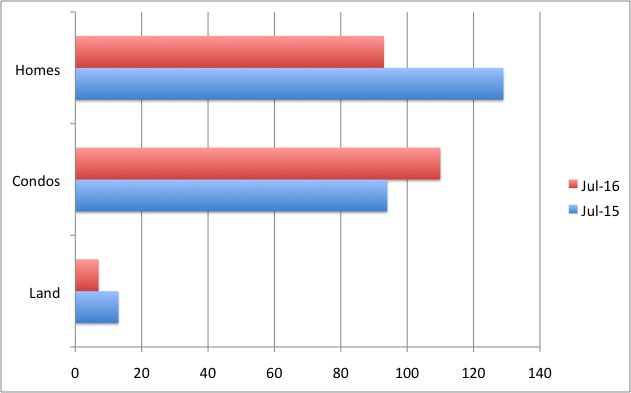 Notable Numbers from the July Real Estate Sales Activity
While compiling the sales volumes and median prices, I came across some other noteworthy numbers.

New July Pending Sales Contracts
We track the number of properties that go pending in a particular month. It gives us a more recent data point on buyer demand and it also helps us to better suss out whether the prior month’s sales activity is something of a one off event or part of a broader trend. I will spell that out a little better as we review last month’s pending data. 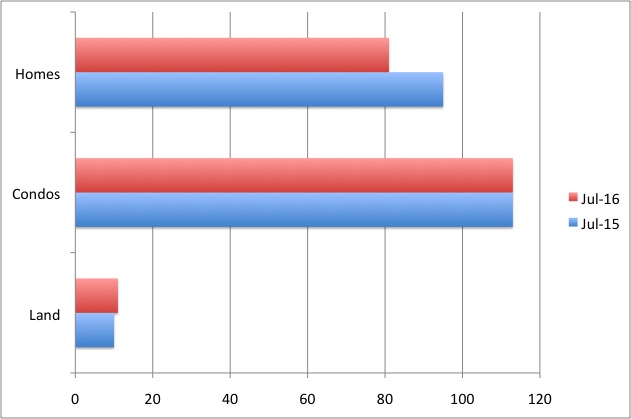 Looking at the pending sales activity, the number of homes that went under contract in July was down compared to last year. The number of condos that went under contract was the same as last year and land pending sales were up ever so slightly. The decrease in home sales is part of what appears to be a continuing trend that we have seen over the last few months. Shrinking home inventory, particularly at lower price points, has led to a reduction in sales activity. The condo market appears to be continuing a recent trend of sales at or above last year’s totals. I will delve into that in more detail below. While land sales aren’t exactly booming, it was good to see that they were up slightly from last year. That would suggest that the low July land sales numbers were more of an outlier than the start of any sort of trend.

The first thing I did was break down the sales volume over the last four months by price point. 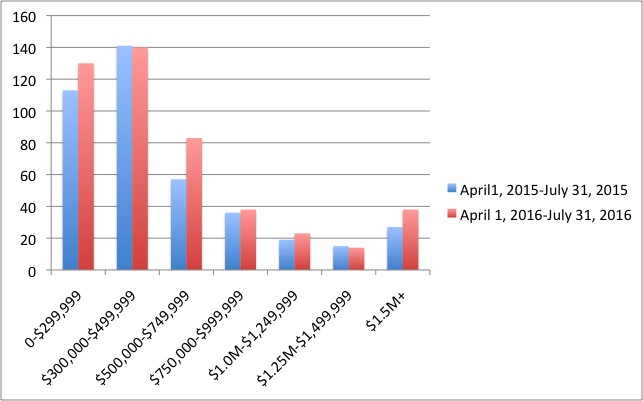 I can’t say that this breakdown provided me with a clear picture of the driving force behind price increases. We can see an increase in sales below $300,000 and an increase in the $1,500,000 and higher range. The middle price ranges tend to be a mixed bag. The biggest increase in activity of any price range occurred between $500,000-$749,999. I can’t say off the top of my head why that would have occurred. The middle of the market, so to speak, also included the only two price points where sales were down compared to last year. The remaining price ranges saw relatively limited increases over 2016.

Not feeling like I had a clear answer, I took a look at two other data points. The first data point is is whether or not the property allows short term rentals. This data is somewhat flawed as it is not a mandatory field in our multiple listing service. In other words, not every condo sale that occurred over the last month reported whether or not the condo allowed vacation rentals. 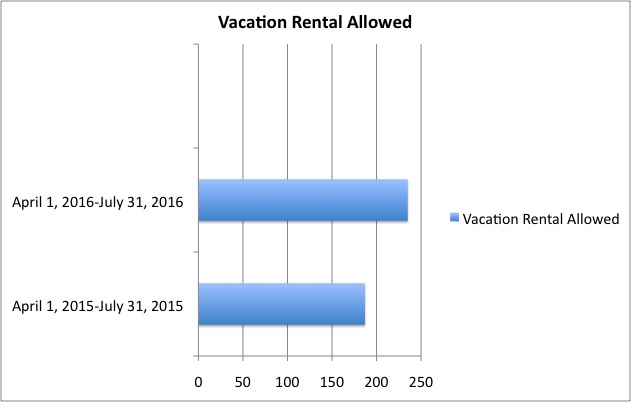 It is pretty clear that there was an increase in sales for properties that are reported to be vacation rentals. I calculated a 26% increase over the period between April 1, 2015 and July 31, 2015. It was interesting to note that the increase in vacation rental condo sales was particularly evident in the $500,000-$749,999 price range. That appears to point to a significant driver for sales activity in that price range.

The one other data point I wanted to look at was new developer sales. New developments can be market drivers that boost the overall sales activity. In some cases, the boost can mask other market trends. An example of this is when Honua Kai started to close a lot of condos while we were still in the thick of the downturn. Overall condo demand was low, but sales numbers were relatively high as buyers were closing on contracts that were originally written pre-construction during the peak of the real estate boom. From what I could glean, we haven’t seen a similar phenomenon over the last four months. There was an uptick in new development sales. I counted 29 new development sales from April 1, 2016-July 31, 2016. That is up from 23 sales during that same period last year. However, the vast majority of these contracts were written recently.

While I can’t say I have definitive answers on what is driving the recent uptick in condo sales, the data above points to three price ranges where the improvement was most prevalent and a type of condo that saw more activity. Based on anecdotal evidence and the quantitative evidence, I am going to postulate a few reasons for the increases in each of these segments. The increase in sales at the low end is a reflection of the continued strength of the buy over renting argument on Maui. Maui rental rates have soared. Low borrowing costs make owning a number of Maui condo less expensive than renting. As long as rents remain high and rates remain low and inventory is sufficient, that part of the market should continue to be busy. I can’t say definitively why the high end market is outperforming last year in terms of sales. When I look at the luxury home market, sales totals between 2015 and 2016 have been almost identical. It just seems as if high end buyers are gravitating more towards condos this year. I believe the increase in vacation rental condo sales, and in the $500,000-$749,999 range in particular, is a reflection of pretty strong consumer confidence among some mainland buyers. West Coast real estate markets have been strong and the stock market has performed well. This means more cash for discretionary purchases like a vacation rental condo on Maui.

A Few Closing Thoughts for Maui Buyers and Sellers
I think there are some things to be learned for the overall Maui market from my review of the condo numbers. The biggest is that there is variability in the strength of the market by price point. I think you can also add geographic variability as another factor. Not all communities are seeing equal levels of buyer demand. While these stats tend to paint the market in broad brushes, how buyers and sellers approach the Maui market is going to be a reflection of their specific segment of the market. Contact The Maui Real Estate Team if you are interested in buying or selling a property on Maui. We would welcome the chance to hear about your needs and to discuss market conditions that are most relevant to you.