April came and went pretty quickly on the Valley Isle of Maui. This is an interesting time of year as the very last of the Winter Whales are leaving our shores for the food rich waters of Alaska. We also start to see a healthy decrease in human visitors. That being said April is typically a pretty big month for real estate closes. With average transaction times of 45-60 days, many of our April closes are based on contracts written during the heart of the winter visitor season. I searched through the local MLS database and it appears as if we had pretty solid activity for the month of April. The numbers presented below are my “unofficial statistics”. They are sneak peak before the Realtors Association of Maui releases their numbers sometime in the next week. The numbers are followed by some context and commentary. Without further ado here are the Unofficial April 2011 Maui Real Estate Statistics. 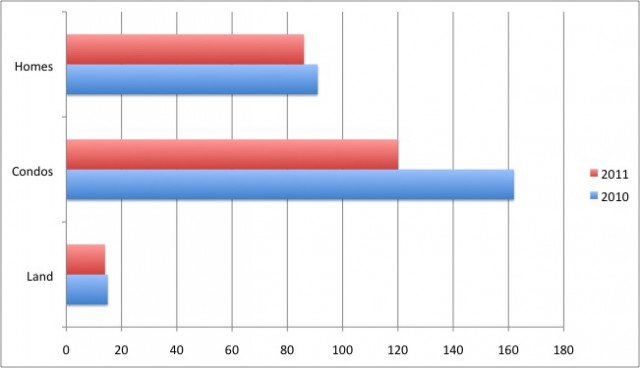 Looking at the numbers above, condo sales volume stands out. As with the March sales numbers, there was a considerable decrease in sales volume compared to the same time frame in 2010. Once again, the numbers are a little bit deceiving. If you are a regular reader of our monthly stats, you have likely heard me refer to the Honua Kai Effect. Honua Kai is a large new development in the Ka’anapali area. We have seen a significant number of sales at this complex over the last two years. Many of these sales were based on contracts written pre-construction back in 2005 and 2006. The sales volume for April of 2010 was boosted significantly by 39 Honua Kai sales based on long term contracts. Long term contract sales waned significantly in 2011. There were only two long term contract closes last month. If you deduct the long term contract closes at Honua Kai from each April’s numbers, the volumes for 2010 and 2011 come in at 123 and 118 respectively. That shrinks the difference in sales volume from 26% to 4%.

While my adjustment of the condo numbers decreases the difference in sales volume between 2011 and 2010, it is noteworthy that all three property classes saw a modest decrease in year to year sales volume. This comes on the heels of pretty healthy increases in volume when comparing the first quarters of 2011 and 2010. It will be interesting to see what happens in the next couple of months. Is this just an anomalous month with more sales volume increases to follow? Are we going to see activity level off or could we see a modest decrease in activity? Factors that could impact market trajectory include overall economic conditions, interest rates and the volume of bank owned inventory. Just as these factors will impact sales volume, they are also likely to impact pricing. We are still waiting for the “bottom” of the market when it comes to pricing. That being said, we won’t know when we have hit bottom with any certainty until we have seen prices begin to increase.

What can buyers and sellers expect in the current real estate market? I think it still safe to say that this is a buyer’s market. Prices are well below market peak and there are some good opportunities among the bank owned properties, short sales and even well priced conventional properties. That being said, buyers will find that the best deals can attract a strong pool of buyers. Multiple offers, bidding wars and above asking sales prices are not uncommon. Buyers who would like or require financing should be prepared for a challenging loan approval process. Banks are giving much more scrutiny to both the borrowers and the properties themselves. Sellers should look closely at recent comparable sales and comparable active inventory when determining listing prices. Sellers who are fishing for high prices in this market are likely to be disappointed with their results. Contact the Maui Real Estate Team with questions or for assistance buying and selling Maui property. We look forward to being of service.