It is hard to believe we already done with January and into the first week of February. That means it’s time again for my unofficial Maui Real Estate Statistics. These are the numbers that I come up with by sorting through our local Realtor Association Database. I call them my unofficial stats because they typically come before the Realtors Association of Maui releases their official stats. Here are the numbers that I calculated for January followed by some context and commentary.

There were 9 parcels of land sold in Maui County this January at a median price of $300,000. That compares to 12 sales at a median $516,300. This constitutes a 25% decrease in volume when comparing the two Januaries. 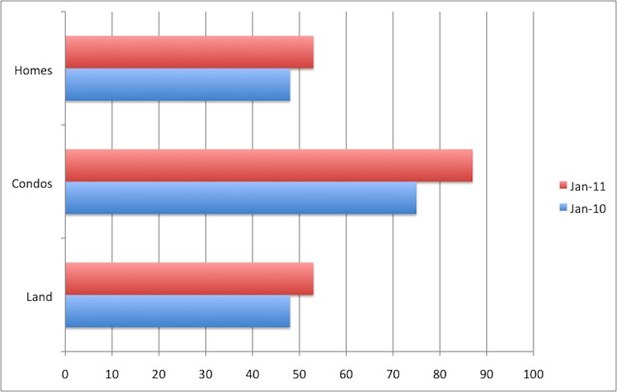 Looking at the numbers above, January appears to have been a fair month for sales. While land sales continue to languish, home and condo sales saw a nice little bump above what we saw last January. I anticipated seeing this improvement. Part of it may stem from increased buyer activity. Another portion can be attributed to the varying impacts of the first time home buyer tax credit. Last January, sales dipped a little from the previous months due to what I would call the tax credit hangover. The first round of tax credits concentrated buyer activity into the fall of 2009 leaving a void in early 2010. Conversely, January 2011 is starting to get further away from the last tax credit expiration. One might argue that we are getting closer to normal activity. That is to say we are no longer seeing accelerated demand prior to the tax credit nor are we seeing a lag of demand in its wake.

There were a few other numbers that I think are worth some discussion and context. Usually, I don’t spend a lot of time talking about median prices in my statistics. The reason I tend to short change these data points is that they aren’t always a true indicator of changes in market values. With our smaller sample sizes, monthly median numbers can be impacted just as much if not more by shifts in where market activity is occurring than changes in market values. You can see some evidence of this with this month’s numbers. Home medians appear to be up by a healthy margin. This increase has occurred with no clear indication that home values are increasing on the island. I suggest that this is a result of increased sales activity in higher price ranges at least for the last month. The condo median for January is 27% lower than what we saw in January of last year. While it is pretty clear that condo values have decreased over that time frame, I would argue again that the drastic shift in median is weighted heavily by more activity at lower price points in the market. There is a lot of low priced short sale and REO activity happening below $300,000 and that is pulling the median lower.

Last but certainly not least, the REO numbers for January were the highest I have seen to date. The fact that 42% of all home sales were bank owned is noteworthy. It is a particularly impressive number when you consider that only 9% of the active and pending inventory of homes is owned by banks. In other words, REO transactions are being absorbed at much higher rates than the rest of the market.

What does this all mean for buyers and sellers? Sellers might want to read the paragraph directly above twice. Bank owned properties are seeing a disproportionate share of the current buyers on the market. If there are a lot of bank owned homes comparable to your own on the market, you will need to price accordingly. Buyers are going to continue to find good opportunities in this market both among bank owned, short sale and well priced conventional inventory. That being said, buyers will also find that some of the better priced opportunities are quite competitive. Do not be surprised if you encounter bidding wars that drive property sales prices above list price. Contact the Maui Real Estate Team for questions, additional information or assistance buying and selling Maui Real Estate.