June came and went quickly. As they say, time flies when you are having fun. With the many festivals that happened on island last month, visitors and island residents found that good times were plentiful. From a real estate perspective, June also proved to be a pretty good month. I did some digging on the Realtor MLS database today to come up with June’s sales numbers. These are preliminary figures as it is still early enough in the month that we may get a few additional June sales reported. These are a sneak preview of the official statistics offered by the Realtors Association of Maui. The official Maui stats are likely to be posted late next week or early the following week. Without further ado, here are the unofficial June 2011 Maui Real Estate Statistics followed by a brief analysis. 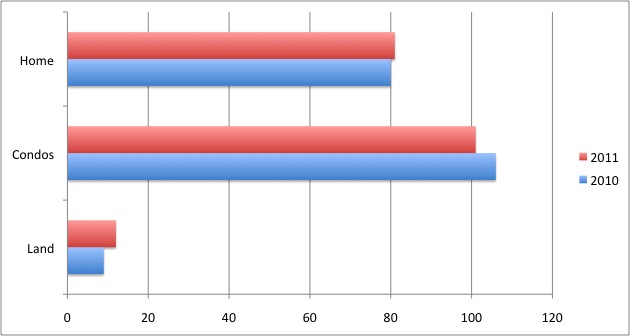 Short sales and REO or bank owned properties continue to represent a significant portion of sales activity in Maui. As a result, we have been tracking the sales volume of these property types in our unofficial stats. There were 49 REO closes and 19 short sale closes last month. Of all of the home sales reported last month, 43% were shorts or REOs. Of all of the condo sales, approximately 29% were REOs or shorts. On the land side, 33% of all of the sales were bank owned. There were no land short sales.

The stats this month bare some resemblance to what I reported in last month’s unofficial Maui real estate statistics. Home sales were up a little over what we saw in 2010, while condo sales were down. That being said, as with last month the condo numbers were skewed due to the Honua Kai effect. There were 18 sales last June that were based on pre-construction contracts that dated back four or more years. This year, there were were only three sales reported based on pre-construction contracts dating back four or more years. If you subtract the long term contracts, June 2011 would have had more condo sales activity.

Land sales for last month were up over June 2010. This is contrary to May when we saw a decrease from the 2010 numbers. That being said, it is worth noting that we are dealing with really small sample sizes. We have been seeing this type of month to month variability over the last few years. The one clear trend I can identify in the land market is that demand has remained relatively limited. Anecdotally, The Maui Real Estate Team has seen an uptick in land inquiries. We shall see if that translates to any any actual increases in sales volume in the coming months.

As we are now half way through 2011, what can we expect for the Maui Real Estate market in the second half of the year? At the midway point, it is pretty clear we are still in a buyer’s market. Seller’s are continuing to find tough competition through the REO and short sale market. New developments on island are also offering some nice incentives for buyers to clear out inventory. Sellers who are pricing at or below comparable sales are having the highest odds of success. That being said, buyers will find that they need to be prepared to act quickly and aggressively for some of the better opportunities on the market. We are seeing competitive bidding on the best priced opportunities. In some cases, we are seeing prices driven up significantly over asking. A prime example is a bank owned home that closed in Ka’anapali this week. It sold for 42.5% above list price. Buyers should also make sure they are pre-approved if they require financing. Most bank owned properties are asking for a pre-approval as a part of the offer package. It also just makes sense to get pre-approved before you start looking as it will help you better define your budget in this market.

As it stands now, there are still quite a few bank owned properties coming on the market. These are properties that have already been through the foreclosure process and reverted back to the banks. We don’t have a firm grasp on how many of these bank owned properties remain to be released to the market. There is the potential for the supply of bank owned properties coming to market to be curtailed as it takes longer for properties facing foreclosure to be processed. With overall inventory already shrinking, buyers may see a comparatively limited supply of properties to choose from as the year progresses. Act 48 could also have additional consequences such as increasing the success of short sales. We just don’t know what the full impact of this legislation will be. Interest rates, the health of the overall economy and exchange rates are other factors that have potential to impact the market. We will continue to monitor these factors closely and provide our insights on the Maui Real Estate market. Contact the Maui Real Estate Team with market questions or for assistance buying and selling Maui Real Estate.