It’s tough to believe we are already in April. March was an eventful month on Maui. Many island residents had a sleepless March 11th as they awaited the incoming tsunami. Fortunately, the tsunami that hit Hawaii was smaller than expected, nobody was injured and the island experienced relatively little property damage. It was another pretty good month for island visitor numbers continuing what has been a strong winter. The trade winds returned in strength, but there was plenty of Maui sunshine to greet our island visitors. After looking through the MLS data yesterday, it appears that the real estate statistics for March were pretty sunny as well. Here are my unofficial March Maui Real Estate stats followed by some comments and analysis. 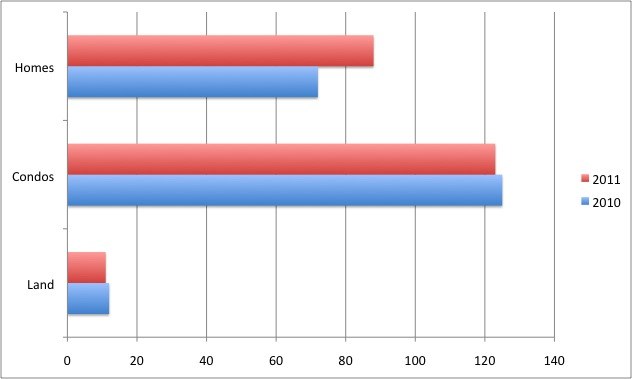 Looking at the numbers above, I thought the condo stats were worth discussing first. The sales numbers this year were lower than last year. With a little digging, you could make a pretty good argument that we saw more buyer activity this year. Last year’s condo numbers saw a big boost via the Honua Kai effect. There were 38 closes based on contracts penciled back in 2005 and 2006. That compares to only two long term contracts at Honua Kai that closed in March of 2011. If you subtract the long term new developer contract closes from each March, condo sales activity went up 36% this year. The big difference in medians can also be partially attributed to the Honua Kai effect. The median sale for the 38 Honua Kai Closes in March 2010 was over $1,000,000. That certainly pushed up the median price overall. This year’s median did not have the benefit of the same number of long term new developer high end sales. That being said, a negligible Honua Kai effect isn’t the only reason for this month’s lower median. It is clear that there is a substantial volume of activity happening at the lower end of the condo market. This segment has been hit hard by bank owned and short sale activity. Buyers are responding to the values in this segment of the market.

The home numbers also saw a pretty good increase in volume over last year. There was some thought entering our winter season that we would be seeing an increase in sales volume. There were a couple of factors favoring improved volume including strong exchange rates for International buyers, higher visitor numbers and some improvements in the overall economy. The home and condo market seem to be following the predictions by outpacing last year’s sales. Land remains the exception with sales volume still limited. The reasons for the slow land market remain the same. There are very few financing options. Buyers are also finding good opportunities on homes that have already been built. That being said, there are opportunities in the land market for those that have the cash or can arrange the financing. There are some motivated sellers who are pricing well below market peak in an effort to attract interest from the limited buyer’s pool.

Where does the market stand now? Are we at the proverbial bottom yet? That’s tough to say. As many have observed, we won’t really know until we are past the bottom. It is good to see the market making some positive strides with increased sales activity. The big question is can we sustain this increased activity? The two biggest factors in play remain the inventory of distressed properties and the economy. For a month or so this winter, we seemed to have something of a lull in new bank owned properties. That may have given some the false hope that the pipeline of bank owned properties was starting to dry up. In the last couple of weeks, that appears to be changing with a steady uptick in new bank owned listings. There are also still quite a few properties that are facing the prospect of foreclosure. The size of the pending bank owned inventory will end up having a strong impact on the market. The economy has continued to show positive sings with private sector payrolls increasing again. That being said not all of the economic news has been good. There are other headwinds that have started to appear over the last month. Rising oil prices are a threat to economic growth. It is thought that increasing energy costs are one of the reason consumer confidence has seen a pretty big dip in the last couple of months. The end of the federal stimulus and difficulties in Japan could also slow growth.

Based on the above, I don’t see things changing too much for buyers and sellers in this market. Buyers will continue to find good opportunities priced well below peak market prices. That being said, buyers should be prepared to face competitive bidding situations on the most compelling values. Buyers will also find that while financing is available with good credit, the process can be arduous. Sellers will continue to find tough competition from the bank owned properties on the market. They will need to position their home well vs the rest of the comparable inventory to improve their odds of a sale. Contact the Maui Real Estate Team if you have questions or need assistance buying or selling Maui Real Estate,. We look forward to offering our assistance.